The wisdom of Socrates 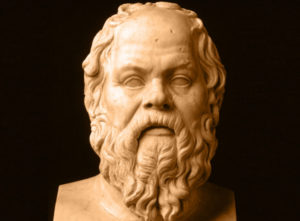 The philosopher Socrates (470-399 B.C.) had a simple motto: “know thyself.” He believed that self-discovery was the most important and difficult form of knowledge. In response to questions from his students on whether he believed in the gods such as Zeus, the mythic monsters such as the Medusa and Minotaur, and divine interventions in human affairs, he answered, simply, that he had no time to corroborate or refute such things. He was concerned only with knowing himself.

So instead of asking whether the mythical figures “really existed,” he used them as models for his own action: he would consider whether he himself was a ferocious monster or a gentle being whose strength was in his ability to teach and learn.

The sage words of Socrates, “know thyself,” ring true as ever in the gym. To “strengthen your strengths” (a key principle I’ve discussed in a previous post), you need to first identify them. You need to discover your gifts.

As a beginner, it’s not easy. When you’re first starting off, everything feels hard. You won’t have a sense of your strengths until you struggle a bit and persevere. How many times have you thought to yourself “I’m bad at this” based on a sample size of one or two tough workouts, or sometimes, based simply on what others have said about the exercise?

Consider how easy it is to believe that you are weak at pull-ups if everyone around you says, “They’re so tough.” Have an open mind at the beginning. Trust that it takes time for a gift to emerge.

And never get discouraged by those around you who appear to be making quicker progress than you. One thing I’ve learned, and that should give any beginner confidence, is that someone with a seemingly natural ability from day one may peak quickly. By contrast, a person who struggles at first may have a greater talent buried just a little deeper, a talent that needs some extended cultivation to emerge. The only way to discover a gift is to work hard at a range of exercises, engage in some friendly competition with your workout partners, and see what develops.

My uphill battle with bench press

It took me years of strength training and powerlifting to fully realize that pull-ups, and not bench press, or even squats (my favorite power-lift) is my strength. For a long time, I had a special fondness for bench press. And what guy wouldn’t? Bench has been a staple of bodybuilding ever since Arnold Schwarzenegger made it famous in Pumping Iron. It’s been used for ages as a test of strength in the NFL combine test. Perhaps the most ubiquitous question in the gym is “how much do you bench?” Naturally, I thought bench was my thing. I wanted to believe it.

Through hard training and competitive powerlifting, I was able to work my way up in bench to one clean rep, pause at the bottom, at 285lbs.  But every time I’d be on the verge of the vaunted 300lb lift, I’d tweak a pectoral muscle (right in the spot where it meets the shoulder) and be set back a month. I must have injured my outer pecs at least five times on each side of my chest! I learned the hard way that one-rep-max bench press just isn’t my strong suit.

Over the years, I’ve seen many bench pressers get injured, which my say something about the merit of the exercise. But I know others who are just built for it. At one powerlifting competition, I witnessed the winner of my weight class (75kg) bench 360lbs and set a British record! Clearly bench is his strength, though he also squatted 450lbs and deadlifted 570lbs.

Coming to the insight that heavy bench wasn’t for me was difficult at first, in part because it required a break from convention, a resolution to go my own way and search for a strength that wasn’t smack in the middle of the main stream. I came to realize that my sweet spot was a combination of strength and endurance.

My experience on the bench press taught me an important lesson for life: knowing yourself requires mindfulness and courage. You have to look into yourself but also be fearless in challenging conventional wisdom. When you think you’ve identified your strength, you’ve fought only half the battle. Now you have to face those who tell you it can’t be done.

When I resolved, back in 2012, that my new goal would be to improve my strength while lowering my mile time to under 5:00, I had to reject the conventional wisdom that strength and speed don’t go together, that to get lighter and faster, you have to sacrifice strength. But guess what? I discovered that strength in pull-ups is entirely compatible with running fast.  The two even reinforce each other.

Remember, when you summon your will, you will find a way. But the will must be guided by your distinctive gifts – those can’t be willed. Ultimately, you have to go by what feels right and play your hunch. That’s what makes life exciting.