…how you’re aerobically out of shape, how your arms aren’t lean enough, how your legs are scrawny. It’s natural to think this way. And there’s even something admirable about it: you want to be honest in confronting what’s in need of improvement. But focusing on weakness is the wrong framework for success.  Instead of starting with your low points, start with your strengths and focus on making them stronger.

People too often let their talents languish because they’re so preoccupied with bringing everything up to par.  “Squats?  I’m already good enough at those. I should really be focusing on running; that’s what I’m terrible at.”  Don’t fall into this mindset.  There is no such thing as “good enough.” Make your strengths the focus of your training, and the rest will follow.

I can tell you from experience: Never have I been more motivated and all-around fit than in training with the sole purpose of improving my strength: pull-ups. The reason is simple.  Strength inspires.  It gives you pride and confidence.

Strengthen your weak points as a means to strengthening your strengths 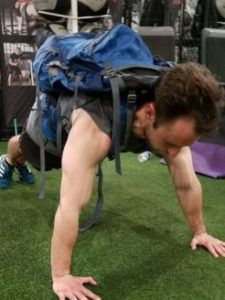 If you fear that zeroing in on your strengths will make you one-dimensional, throw that thought away. Why? Because the body works in unison. To make one part the best it can be, you have to pay attention to the whole, which means hitting some weak points.

Consider three great athletes: Usain Bolt, Michael Phelps, and Serena Williams. Each works tirelessly to strengthen his or her immense talent in a specific sport.  Yet all of them are in fantastic shape on multiple dimensions. They have speed, strength, endurance, and coordination.

Great athletes demonstrate that to excel at anything in particular, which, for you, could simply be your favorite exercise in the gym, you have to do a lot of other exercises, ones that don’t come as easily and that hit other muscle groups.

But hitting your weak points as a means to strengthening your strengths is very different from hitting your weak points for their own sake. Think what a drag it is to walk into the gym everyday saying to yourself: “Here we go. Time to bring my out-of-shape body up to an acceptable level.” That’s essentially what you’re saying when you focus on weak points.  Think how much better, more inspiring it is to say: “Time to make myself the best I can be at squats, so here goes 20-minutes of biking to shed some weight and improve my pound-for-pound strength!”

Maintain laser focus on what you do best, and sooner or later, you’ll find the rest is fun rather than burdensome.  Before you know it, you’ll be at the top of your game in what you love most; and your former weak points will be much improved.

A good example is tennis star Juan Martin del Potro. His way of dealing with a weak backhand was to take his devastating forehand to the next level.  Instead of obsessing over his weakness, he just learned to hit his forehand all the harder! He was thus able to bludgeon his way to a US Open victory and top ATP ranking.

Who knows?  Maybe your strength will turn out to be a real talent.  You never know until you take it as far as your passion will carry it.

Do you think that when I first began doing pull-ups I thought of setting a Guinness World Record, or even considered how many pull-ups I could in one minute? No way.  I just enjoyed doing them a little more than other lifts.

My point is that your “strength” can simply be whatever motivates you in the gym more than everything else.  Take your strength as your starting point and build a holistic training plan around it.