How Nietzsche can help you in the gym

How you feel when you step into the gym does not determine how well you’ll do.

You may feel tired.  You may feel lazy. You may feel sluggish.  You may want to turn the car right around and go back home.  Don’t do it!  Block those thoughts out; because guess what? Inspiration can strike when you least expect it. 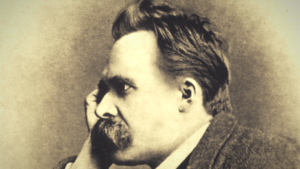 The philosopher Nietzsche wrote that “we don’t come to thoughts, they come to us.”  By this he meant that ideas and insights come as lightbulb moments, not as forces within our control.  He drew the radical conclusion that there is no independent “self” or “ego” behind one’s thoughts and actions.  The self, properly conceived, is a spiritual force that develops through confrontation with the unexpected.

It wasn’t until a breakthrough powerlifting competition that Nietzsche’s wisdom struck a personal chord.  I had flown into London from Boston four days before the competition, and I was still suffering from jet lag.  Add to that the rush of pre-competition excitement the night before, and I was unable to sleep a wink. The next morning, I pulled up to the venue in a daze, utterly unsure of how I’d perform, ready to say “wait till next time” before I even started. 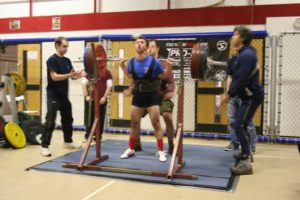 But as I stepped into the vast gymnasium to the familiar sound of clanking plates, and to the inspiring sight of the lighter weight classes warming up, life crept its way back into my legs and spirit.

As I started my own warmups, the scales fell from my eyes.  By the time my name was called to the bar for my first attempt at squat, I felt like a bull whose tail had been pulled. With a burst of energy, I hit personal bests in all three lifts.

Prepare yourself for a breakthrough: get to the gym!

Since then, some of the best workouts I’ve had have been on days when I felt terrible stepping into the gym – tired, distracted, recovering from a cold.  But at some point, during the workout, maybe half-way through, maybe at the very end, something clicked, and I hit my stride.  I’ve learned never to give up because I feel lazy, preoccupied with other things, or down in the dumps.

“Make an attempt!” I tell myself.  “Get to the gym, get into your groove, and give yourself the chance to have a breakthrough moment!”

Remember this: no one wants to go to the gym – well, almost no one.  Even the crazy few like me, who look forward to workouts and train passionately for competitions have plenty of days when we want to hit the snooze button.  Especially when I have multiple balls in the air – writing projects, work obligations, and so on – transitioning to the workout can be a struggle, even a chore.

It’s in these moments that I remind myself of Nietzsche’s wisdom: inspiration comes when you least expect it.  But you have to give yourself a chance to be inspired. How you feel about something from the outset, whatever it is, does not determine your success or ultimate fulfillment in doing it.  Many days you have to work your way into the workout.  That’s why it’s important to have an extended, go-to, warm-up routine to help you get going.

So many things in life work this way.  To get pumped up, and in the right frame of mind to do something, you have to do it.  Don’t get stuck in the vicious cycle of dispassion and self-defeat.  Make the attempt when you least want to, knowing that you stand to gain.

It’s like cracking off a stack of thank-you notes that you’ve been meaning to write.  At first it feels like a drag.  But as you get into the groove, the rote strokes of the pen and turns of phrase may begin to issue in a genuine feeling of gratitude.  That’s why saying to yourself “I am not in the mood to write thank-you notes, and my response will be inauthentic” is not a valid excuse.  Writing them is not always going to be a pleasant task.  But maybe at the end of it, you compose a note that actually brings your gratitude to expression and strengthens a friendship.

You never know until you make an attempt!